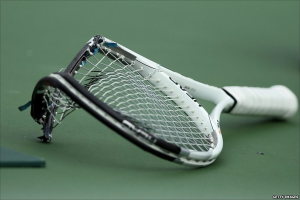 This post may collapse into sentimentality and self-pity, but then a lumbar-disc bulge/herniation will do that to you believe me!
As the title of this post indicates, I was told by my consultant last week that I am unlikely to play tennis again – at the very least not for 18 months and I very much doubt I’ll be confident enough to play at 100% if I’m ever on-court.
I am still digesting the news to be honest; tennis is a big part of my life.
I have no other active hobbies – never good enough at squash to offer a decent challenge and my football playing days are long gone after a dislocated knee has left it weaker than my writing skills.
I look back fondly on the last 20-25 years of a ‘career’ (and I use that term lightly given the sorry standard and h2h records) – I was at home on the courts, win lose or draw.
BEST RIVALRY
Mike Drain – My early playing days were spent losing every time against David and some later contests against Rob were good due to the altogether different challenge he posed. But undeniably over the years it has been some contests against Mike Drain that will stay in the memory. Unlike Rob and David, for a long time me and Mike were evenly matched and played a similar baseline style. Since then of course I would routinely lose our matches but the quality remained at a good level.
STRENGTHS
Serve – If nothing else, I’d hope that my serve would be remembered as a genuinely good one; at times potent and regularly a saviour from 0-40 down. It would be the only shot that would receive praise from onlooking coaches.
Forehand – Again, a real weapon when it was firing, and certainly my ‘bread and butter’ shot that was infinitely more reliable than the backhand.
Drop-shot – It would take a time to warm-up, but when it was working it was a very rewarding little gem.
Smash – A little erratic, and I wasn’t always in the perfect position to actually pull it off, but it won me a lot of points, .
WEAKNESSES
Backhand(one-handed) – Immediately identifiable as a major weakness and ripe for exploitation. Almost exclusively a defensive shot due to my poor grip technique. When I was able to fire back some flat one handers it would take my opponent by surprise and win the point.
Lob – Never confident with this and always heavily signposted, did improve in later matches.
Movement – The biggie, I was rarely in the right position to get the timing right.
BEST SHOT PLAYED
Somehow, I remember this as if it was yesterday. It must have been about a decade ago (still using that excellent white Wilson racquet). It was another tight match with Mr Drain and another long baseline rally seeing both of us running from side to side. What made this shot so memorable was how those aforementioned weaknesses above contributed. A running backhand down the line passing shot, as crisp and inch-perfect as you could ask for. The kind of shot where everything comes together and works.
BEST COURT
The new courts in Chelmer Village were very nice and the converted barn in Nayland was a great find – if rather remote for my Chelmsford-based chums, Hyde Park and Greenwich get a shout out too. But the best courts were unsurprisingly at the David Lloyd centre in London (I forget where now). I was invited by Tennishead magazine to contribute to a racquet testing feature and had a go on some indoor plex and some great clay courts outside.
Well, with that I bid farewell to tennis and say thank you to my three main opponents over the years.