Joining Roland Garros and Wimbledon editions, my Tennis Travels series continues here with a look back at previous visits to the season-ending championships at the O2. 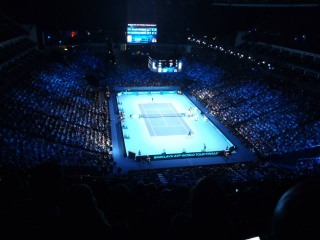 It took me far too long to register that my best chance of seeing the bigger names in the flesh – and Federer in particular – had been on my doorstep all along. Working in automotive publishing in London, I had already been to Wimbledon multiple times, but had never seen the big big names.

It was truly spur of the moment: in my lunchbreak at work, a curious foray onto the ATP website beckoned and lo and behold, some single seat tickets remained for that evening’s session, up in the gods yes but a ticket nonetheless.

£68 was of course far more than the £20-25 I had been used to shelling out at SW19, but the solo sojourn to Roland Garros earlier that year obviously instilled a ‘YOLO’ mindset which led to me clicking ‘buy’.

I won’t forget that evening at the o2 in a hurry. The venue is the perfect exhibition space, and so chameleon-like in its willingness to shape shift and adopt the theme of whatever it’s main event may be at the time.

Huge posters featuring the eight combatants lined the short walkway from tube station to the venue and then more again inside, echoing an almost gladiatorial feeling , with flags and banners lining the paths to the coliseum.

Yes there was a merchandise stand, yes I bought an ATP adorned ‘performance’ top – which is do still wear when busy losing tennis matches against friends. No, it isn’t gaudy at all, so there’s a win somewhere.

En route to my seat there was plenty to see; practice courts, charity locker equipment exhibitions and more merchandise/activities/promotions from the gamut of sponsors which has of course only increased over the years.

When I at last sat down the height didn’t bother me, in fact it was the perfect way to appreciate the unique experience the O2 offers for regular tennis fans.

The atmosphere is completely different from traditional tournaments, the whole thing is accompanied by a light show to rival most concerts, heartbeat motifs, animations and video accompany every ace, break point and of course, hawk-eye challenge. My best summary would still be a kind of tennis mixed with the Tron Legacy lightcycle battles.

Stunning really, and a true spectacle – rivalled only by Federer’s performance that night. Thinking back, it was a huge risk of mine; what I thought would be my only time seeing the great man in the flesh, and he was playing his greatest rival and the man who by and large had now well and truly had the measure of the Swiss.

But Nadal was off-form that night, and of course the indoor conditions would always favour Roger. The 6-3, 6-0 scoreline was accompanied by 17.000 ‘oohs’ ‘aahs’ and just smiles of appreciation. Federer fans, Nadal fans and thousands more neutrals were in awe for just over an hour – and that remains the gift that only Federer can give amongst today’s current crop. 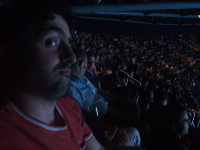 Inevitably I went the following year as well, and dragged along my girlfriend one night and a best friend the following evening. Tsonga, Ferrer, Berdych and Del-Potro were the talent on show. They didn’t disappoint over two three-set thrillers.

Sophie enjoyed the show and the relaxed nature of the whole thing, but not the height! David also enjoyed the spectacle and the allowance to have a full-blown conversation during play (everyone does it). The fact that alcohol was encouraged only made it better for the two of us to indulge in the customary random conversations which inexplicably involved the old children’s cartoon Babar.

2013 – Down the front with fiancée, family and Ferrer again

Berdych and Ferrer featured again this year, but so did Novak Djokovic – the first time seeing him, and after the histrionics the previous year we were situated in the third road this time. Great seats and lots of chocolate, but the tennis disappointed slightly as Ferrer – who featured twice over two nights, could offer little resistance.

2016 – Up in the highlands again, watching the new World Number One

A 30th birthday present for the aforementioned pal, and with a bit of forward planning we were able to nab tickets for both the Day and Evening sessions for a paltry £98 altogether, which is really rather reasonable. In a rare stroke of luck, the scheduling worked out pretty perfectly and we were served up a mix of playing styles and the biggest names in Wawrinka, Cilic, Nishikori and a certain Andy Murray.

Yes, the first time seeing the Scot in the flesh was as expected – huge swills of home support – but we were surrounded thankfully by some genuinely knowledgeable fans which kept the empty ‘whooping’ for the newly top ranked Scot in check.

Nishikori served up a memorable performance in an entertaining battle with Murray who eventually triumphed, whilst Wawrinka laboured somewhat to a tight straight setter against an in-form but too aggressive Cilic.

Again the alcohol flowed, but in the first year to see both Nadal and Federer missing from the rota, the day’s play made this a highlight visit.