After my maiden voyage the year before I returned once more to Paris for a slice of serenity and a dusting of French clay rouge.

Joining me this time was my long-suffering fiancée sporting some suitably shaded locks and who herself would enjoy many a close encounter with some handsome French toast.

Yes, this visit was markedly different from my hustle and bustle court-hopping approach the year before when going solo. I showed Sophie around the joint of course (the beautiful setting, gardens and stadia warrant that alone – but so too do the numerous boutiques and other assorted miscellanea that make RG such a special place to be).

We had tickets for Court 2 that year, and this is mainly where camped for the day – with luminaries as Tipsarevic, Querrey and Juan Monaco in the schedule, it was a justified approach to the day.

Unlike my first train out of dodge at stupid o’clock the year before, we stayed overnight in London allowing a brisk sprint across the road to Kings Cross and therefore less of a rush once in Paris. 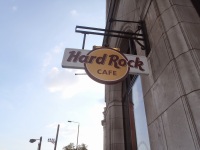 This obviously meant a trip to Hard Rock Café London (we are slight fanatics), what better way to kick-start a little sojourn?

Once at the grounds the next morning little flashes came back, the quirky loop of the Metro amongst the south-west regions, the tennis racquets pained along the walkways up to the queue (although the queue itself was an unwelcome new addition) and soon enough, those wonderous surroundings and that magnificent ambience enveloped us both.

The day would be spent flitting from our seats to the shops, such is our well-documented spending habits (now quelled I hasten to add) and Sophie’s comparatively laissez faire approach to the sport of kings.

But there was much to admire on-court, with Sam Querrey producing the goods against an off-colour Tipsarevic who’s brief moment in the sunny top ten was nearing its end around this time. And Juan Monaco followed up with some assured clay-court craft. 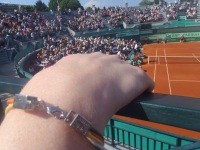 The Argentine was nonchalantly posing with fans for photos post match and should be honoured to have received a smitten round of applause from Mademoiselle Dobinson.

Three years on, and I’m set to embark once more to the most divisive of majors with a brave close friend and fellow tennis fanatic. Vive Roland Garros. 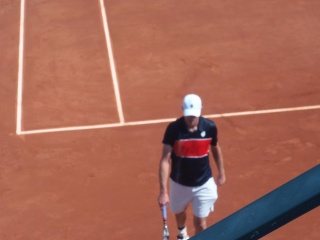 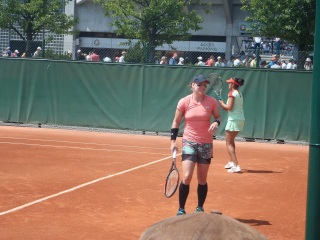 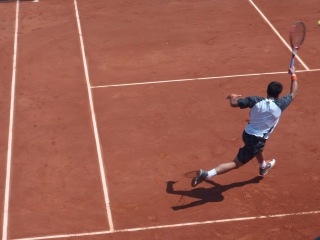