Wimbledon 2012 will rightly be remembered most for Andy Murray becoming the first British men’s finalist for 74 years. It was a feat which finally ended a chain of semi-final exits that the nation had endured through both the Scots’ own career so far and during Henmania. Of course, in the achievements of Serena Williams, Roger Federer and especially Jonny Marray, SW19 served up equally notable moments.

The (then) 100 ranked Lukaz Rosol produced a display of consistently devastating tennis to blast double champion Nadal away in a night of drama. The Czech was nerveless as he employed his do or die game plan of relentless attack. It is the best strategy to adopt when facing the Spaniard, but due to its high risk nature is rarely a shoe-in for success. At some point Rafa will gain his momentum, slow things down and dictate play. By the fifth set light had faded. The roof spelt danger for the number 2 seed by both upsetting his momentum and through the indoor-esque conditions which favoured his opponent who continued to blast 95+mph groundstrokes. It was a performance that set the tone for the tournament; attack the big four and try to shock them off court; Julien Benneteau almost replicated this against Federer in the next round.

The horror show in Paris placed firmly behind her, Serena made serene progress through the fortnight in London conjuring up tennis that was at times unplayable. Like Federer, the American’s quest for further Slams may still come up short on other surfaces if her rivals are on song, but on the lawns her game is inch perfect. On pure talent, Serena is perhaps still behind Steffi Graf, but then injuries – some serious have hampered her tournament count. That and the spell where arguably tennis wasn’t either Williams sibling’s main priority. That last point brings me onto a debate rumbling for a few months now – is it fair that Serena should play so much less during the year and in effect ‘save herself’ for the slams? Her opponent Agnieska Radwanksa has scythed her way up the rankings with stealth. The Pole carries on the tradition in the women’s game of late of sailing up the rankings with consistent performances week in week out without troubling the headlines or latter stages of slams. Let’s hope her first semi-final and final appearance changes that.
Federer defies critics and denies Murray’s dream run 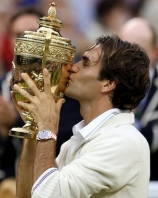 There’s little I can add about Roger’s performance at this year’s championships that hasn’t already been said. For the Swiss, this victory will rightly rank among his favourites owing to its significance. Here is proof that the maestro is far from finished as many had long opined. There were dominant performances (Fognini) and hard-fought battles (Benetteau) but the victory over an admittedly off-colour Djokovic (the Serb reminding me of his fragile pre-dominance years) in the semi’s and of course the phenomenal form in those last two sets on Sunday showed to the world that Federer is every bit as good as Novak and Nadal on his day. A return to number one for what will be an unmatched tenure simply sweetened things further.
My praise of Federer will come as no surprise to those who know me. But what of Murray? Until this tournament I reviled the Scot more than any other sportsperson. I’m still not a ‘fan’ of his and will never support him but can do nothing but admire his play, work ethic and attitude this year. Murray played outstanding all fortnight, some blips here and there (matches against Karlovic, Baghdatis and Ferrer were far from comfortable at times) but such was his determination, self-belief and frequent shot-making that you never feared for his progress.
His tearful speech only endeared him further of course, he will be back and he will be just as ready.
Jonny Marray goes one step further in fairytale victory 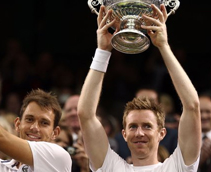 But as monumental as Andy Murray’s run to the final was, another Brit –an Englishman to be exact – did go one step further. His doubles triumph with partner Frederik Nielsen was the first time a wildcard team had won the title. Marray was the first Brit to reach the final since 1960 and the first winner since 1936. A surge up the rankings – allowing for regular inclusion in the bigger tour events, prize money that equalled 50% of his career earnings so far and an improved chance of reaching the Tour Finals in November.

Other stories of the tournament? Well Kim Clijsters was her usual self, operating at extremities. Pulsating progress (including a demolition of the sorry Jankovic) before a double breadstick drubbing in her final SW19 appearance to Angelique Kerber.

There was a much more sudden woe for Australian tennis with a catastrophic showing. No men and only the lacklustre Stosur survived into round two, Arantxa Rus soon polished off any hope for those Down Under. Like Britain (still) there is much to do for Australian tennis, the only comfort being that such poor form is exclusive to the grass, such is the Aussie’s disregard for when training the new generation.

Sara Errani has had an amazing year, but quite what the Italian was thinking when she succumbed to a ‘Golden Set’ it will never be clear. The in-form Kazakhstani Yaroslava Shvedova – clearly thinking about the Olympics already – went for gold winning every single point of the first set.

Both last year’s finalist and 2012 favourite Maria Sharapova and her conqueror in 2011, defending champ Petra Kvitova were bundled out. Shrieky was eventually taken care of by the likeable Sabine Lisicki (who remains a work in progress), perhaps some fatigue was a factor after a gruelling clay campaign. Kvitova hasn’t looked right for much of the year, but played well enough here. Her vanquisher Serena was too hot for anyone to handle.

Finally, a word on Andy Roddick – his kiss to the crowd suggesting this was the last time the likeable nearly-man would grace the SW19 greens in anger. The American’s game belongs to the past generation, and he has known it for some time, injuries have only quickened his sad decline. The best player to have never won Wimbledon? A-Rod is certainly in with a shout….