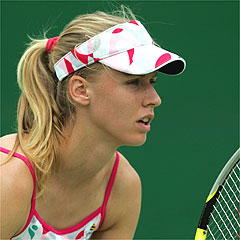 Well Doha and now the WTA tour has wrapped up for another year – Caroline was made the new numero uno and was subsequently beaten by Kim in the final. A tight and engrossing encounter, but the outcome provided both a fitting and indicatively frustrating outcome.

Wozniacki has been consistent this season and surely a slam isn’t too far away (in any case she looks to be more capable on The Big Day than her fellow Slamless no 1’s of recent years) but her game and her mentality still need honing to truly merit that number one ranking.

Anyway – petty jibes aside, it was a good quality tournament – against the odds too!

Sadly though, it should best be remembered as the arena in which the greatest player of her generation – realistically the last decade – never to win a Slam retired from the game.

Elena Dementieva – one of the most solid, consistent and wholly likeable players both on and off the court hung up her racquet after a limp loss to Sam Stosur.

Frequent wins over all her compatriots at the top of the game, some close (and others not so close) Slam finals contested, a raft of titles and that very special Olympic Gold. She even threatened the top spot herself a few times.

Still, rarely out of the top ten she was the epitomy of form and professionalism – sure there were some major tantrums and often some tears, but the memory of Dementieva will be of a fiercely competitive, patriotic and professional player who – that memorable serve aside – produced some of the best tennis seen in the last decade.

Always easy on the eye too! 😉