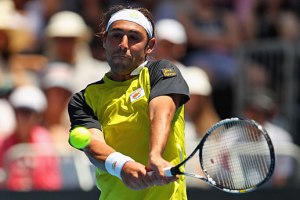 Match of the Day – Marcos Baghdatis bt David Ferrer(17) 4-6, 3-6, 7-6, 6-3, 6-1
The fourth day saw the majority of the seeded ladies breeze through their matches with the loss of a handful of games. The men’s competition saw another five matches go the distance. The highlight of these, for sheer emotion as well as – on paper at least – a considerable upset, was Marcos Baghdatis fighting back from the brink to beat David Ferrer. The Spaniard seeded 17th does have an unfortunate habit of under performing or choking in far too many Grand Slam matches whatever the stage. Yes his Cypriot opponent is one of the toughest challenges on any day (particularly here in what is essentially Baghdatis’ home tournament), but Ferrer should be closing these ones out if he is to get back to the top ten. A two set deficit is familiar ground for Bagdhatis, especially here in Melbourne where drama frequently comes guaranteed with any match featuring the 2006 finalist. An actual home-grown hero looms next for the sparkling Cypriot – if the match is even half as good as their 2008 fourth round brawl then it will be a thriller.

Men
Tommy Haas and Janko Tipsarevic also sweated over a five set duel full of power, precision and gusto – the German finally prevailing 4-6, 6-4, 6-3, 1-6, 6-3 and still looking as polished and pristine in these twilight years. Juan Monaco defeated Michel Llodra in five engaging sets offering the always fascinating spectacle of a serve and volleyer pitched against a baseliner. Nicolas Almagro is no stranger to long matches and was given just that from promising and progressively consistent youngster Benjamin Becker finally coming through 6-3 in the fifth. Elsewhere it was more comfortable for the aforementioned Hewitt and the big boys Davydenko, Tsonga and Roger Federer, the latter of which sailed through a tough encounter with Romanian Victor Hanescu. Novak Djokovic laboured slightly in his four set win over Switzerland’s Marco Chiudinelli, but still looks good enough to stake a serious title claim.

WomenSome of the girls had to play again in less than 24 hours today to allow the schedule to return to order by the fourth day’s play. It made little difference as a horde of seeds posted comfortable wins in the ever increasing Melbourne heat. Serena and Venus looked ominous in their straight set victories over Petra Kvitova and danger player Sybille Bammer respectively. There were also impressive straight set wins for Vera Zvonareva, Victoria Azarenka, Agnieska Radwanska, Daniela Hantuchova and Francesca Schiavone. Caroline Wozniacki was again strong setting up a third round meeting with the in-form Shahar Peer of Israel – the pick of the third round match ups in this half. The shocks were few and far between but still significant – the quickly falling Ana Ivanovic looked all at sea against a fiery and greatly impressive Gisela Dulko as the Argentine came through an up and down encounter to win in three. It was a case of going down before fighting back into a winning position, only to then ultimately lose with a whimper. Casey Dellacqua (surprisingly picked over the higher ranked Aussie Stosur) was given the night match on Rod Laver – the recovering local girl triumphed over a resurgent Karolina Sprem in two tight sets 7-6, 7-6.

Seeds/players of note to have fallen today