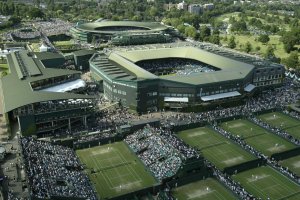 It’s the last week of June, (more or less) and for millions of people worldwide that means only one thing: The Championships.

Forever seeped in history, the green courts of Wimbledon have effortlessly produced drama, emotion, elation and despair in equal measure. With every passing year, as each generation of players with some truly great champions set foot on the hallow grounds of SW19 one thing remains consistent.

The Australian open, placed so near to the beginning of the new tennis season, has the intense heat, passionate and knowledgeable (if sometimes a little boisterous) crowd and a frequent flurry of surprise packages as lower ranked players pull of some world beating shocks after a hard graft off-season.

Four months later and the hard courts of the first third of the season are long gone – replaced by the unique challenge of the slow, sapping clay surface. In Paris the grand showpiece of the red stuff is at Roland Garros where the world’s best have to deal with a notoriously partisan crowd – who can turn on a contender with great speed and conviction – as well as the punishing dirt.

August sess the glitz and glam of New York crammed onto a tennis court. The US Open at Flushing Meadows offers some of the sport’s most impressive and intimidating arenas with a patriotic spectatorship who let their presence be known amidst the superfast hardcourt surface.

With each of these events and the many Tier 1/Premier/Masters events the guarantee of truly world class action is delivered. But nothing quite compares to those two weeks in south west London where it is an overriding sense of tradition and (as with so many British sporting events) an unparalleled sense of history.

It remains the ultimate prize for the players, and has done throughout the eons. It is here that the idols and icons of the sport would have been broadcast all over the world and for two weeks would inspire fans, and future professionals alike.

This hasn’t been the case for everyone of course. Some foreign players find the all white dress code and unfamiliar surface a real problem. Mary Pierce once claimed the championships was not “ very player-friendly” citing that ‘there are a lot of things which make it different to other tournament sand it isn’t one I look forward to”. Former world number one and (criminally only) two time Grand Slam winner Marat Safin has notoriously been anti-Wimbledon despite his semi final run last year: “Let’s not talk about Wimbledon…It’s not really the place for me”.

There are other- more understandable reasons why many players haven’t embraced the event: the prize money only became equal for men and women in 2008 after a lengthy campaign by the leading names of the WTA. The surface itself has caused many current women to act indifferently when they lose at Wimbledon knowing that in a week’s time, the grass season will be over and the infinitely more familiar hard courts will return. Current world number one Dinara Safina echoes her brother sentiments: “I’m always arguing with my coach, who tells me I can play there…I don’t understand this surface…I’m fighting badly with it”.

In 2001 the unique seeding strategy (where a players tournament rank can be influenced by past grass court results) led many of the Spanish clay specialists to boycott the tournament altogether: Juan Carlos Ferrero, Albert Costa and Gustavo Kuerten all asked for a fairer reflection. A lengthy battle ensued an today we have 32 seeds instead of 16, but the All England club still reserves the right to alter the order of those 32 based on grass court form.

Some players haven’t even bothered to turn up at all and this includes high profile names such as Ivan Lendl and (for a time) Andre Agassi.

Yes, Wimbledon still hinders rather than helps the attempt to bring tennis to the masses in the UK (something that Andy Murray’s youthful self-assurance and rags to riches image has done much to change). Unlike the other Slams, the exclusivity and air of the upper classes still hangs in the air. But the pomp and ceremony only intensifies the whole occasion and in some eyes restores some sense of intimacy and grace to a game now dominated by the modern world’s obsession with athleticism, technology and celebrity that every modern sporting event is expected to deliver.

True, the face of the Championships has changed since it was first held in 1877. In 1980 service line monitor ‘Cyclops’ was first used, with service speed guns introduced eleven years later. A new broadcast centre and the stunning new No.1 court were opened in 1997 whilst most recently giant television screens and the Hawk-Eye ball tracking device have ensured the tournament remains technologically fresh-faced.

This year, the final stage of the ‘Long term plan’ (drawn up in 1993 to ensure Wimbledon continued to represent the very summit of the sport) will be showcased – a retractable roof.

2009 will be the first year whereby the elements will not affect proceeding on centre court – an occurrence that has arguably decided many a great match as players’ momentum shifts to and fro with every delayed intermission.

So what of this year? Technological advancements aside, one thing we are not promised is a repeat of the truly epic men’s singles final from last year where the very core of the shift in the modern game was showcased in the sports greatest stage. Rafael Nadal the very encapsulation of today’s power game defeated five time champion Roger Federer, a stalwart of the classic tennis makeup; success won through tactics, technique and fluidity.

Nadal’s absence leaves a rather empty feel to this years event, as despite his godlike but ultimately unattractive way of playing may not necessarily be missed, the loss of the defending champion is always damaging.

Federer of course remains favourite to triumph. Full of confidence from his superb win at Roland Garros and now fully rested both physically and mentally after skipping his usual grass court warm-up event in Halle – the Swiss maestro remains the most complete player on grass by some margin.

Andy Murray will too be brimming with self-belief after winning at Queens (albeit against a significantly depleted field), and with a playing style similar to Nadals but perhaps just that bit more suited to the green stuff he is very capable of taking the title. Add to this the tremendous home support (not quite at Henmania levels just yet as the Scot’s on court brashness hasn’t endeared him to all) and a winning record against Federer and you have a home grown talent who has never been better equipped succeed.

Elsewhere, my picks in the men’s game remain with the grass court specialists despite the courts themselves playing all too similarly to their hard court cousins as the years have gone on. Roddick, Simon, Wawrinka and at a stretch the 2002 champion Lleyton Hewitt all have the game for grass.

Such is the inconsistency of the women’s game at the moment, that it is only the Williams sisters who really shine out as a safe bet. Elsewhere it really could be anyone, as the new breed of yet more baseliners continue to sine one week and then crumble the next. Of them Victoria Azarenka, Caroline Wozniaki and Agnieska Radwanska will do well whilst the recovering Maria Screamapova is always dangerous despite never repeating her success of 2004.
Thanks to http://www.parkfield.co.uk/, Wimbledon Official Site and BBC for the pics.

One thought on “Wimbledon – a celebration and preview”